WILL THERE BE ANIMALS IN THE ETERNAL STATE

WILL THERE BE ANIMALS IN THE ETERNAL STATE? 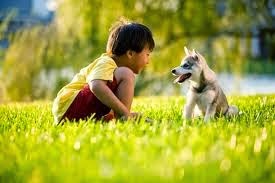 The answer to that needs to consider the very beginning of the creation of God for the New Heavens and the New Earth are a rejuvenated version of that original creation.  That creation came out of a discussion between the threefold Godhead that cared for issues that would occur in the flow of that creation as it unfolded.


Dr. Alva J. McClain states it this way: “The all-consuming purpose of God in creation was to establish a Kingdom on the earth, in which He could display His glory in the Person of His Son. This display of His glory was to be made to creatures made in His image, and therefore, capable of apprehending, appreciating, and applauding His glory. The unfolding drama of the Bible depicts the movements of God in the accomplishment of that purpose.” The book he wrote on this venture of God is called “The Greatness of the Kingdom” taken from a statement by Daniel.


The creation act is outlaid by God Himself speaking through Moses in Gen. 1 and 2 where there are two accounts, the second giving parts of the first in greater detail.


There it tells of mankind originally being herbivorous (Gen. 1:11-12, 29-30). Even the animals that were originally created were herbivorous also (Gen. 1:30). Satan using an animal attempted to broaden the diet of man in Gen. 3:2 using one of the tree fruits that was forbidden by God’s original diet plan for mankind; this bringing about the fall.  Side note - Being a diabetic for over 47 years, I have seen many a person commit suicide with their dietary (habits).


Although in the original creation (before the fall), animals had a purpose of God for being created before being added to the diet of mankind after the fall. Satan first of all used one of the animals in the deception of Eve; another purpose for animals in the creation of God. The second purpose was for dietary additions added in Gen. 9:2-3. Finally they were created for sacrificial use to bring mankind to a stance of righteousness.


The fall brought the main intended purpose for the animal creation and God gave that intended purpose to Cain and Abel. Cain and Abel were first introduced to that purpose in Gen. 4:4-5. Although the care of the trees and the fields produced fruit and the focus of Cain, the acceptable offering to present a blood sacrifice to the LORD. God had created animals as the acceptable offering. Abel in Heb. 11:4 was declared righteous through the proper offering, an animal slain that was prescribed by the LORD. Mankind chose fig leaves and trees for a covering for their sin while God chose a blood sacrifice of an animal. (Gen. 3:21)


When the millennium dawns, all carnivorous animals will become herbivorous again under the reign of Christ for the 1000 years. (Isa. 11:7) But when we enter into the eternal state. Sanctification for every group named by Peter has sanctification completed. There will no longer be need for animal sacrifice to make a man perfect to worship.


When the Eternal State dawns there will no longer be a need for sacrifice to bring about righteousness. God will have brought all of mankind to a perfect state where they finally worship Him in spirit and truth. John 4:23-24. Animals will no longer have the original created purpose. Animals have served their original created purpose and are burnt up with the previous heaven and earth.  The fall has been completed resolved. There is no more death. Paul states that a new body is needed that lasts forever. (1 Cor. 15:50). That body is clothed by God Himself, which is white linen. (Rev. 19:10) No more need for an animal sacrifice to cover the body. Mankind will have returned to an herbivorous state. No more Ezekiel temple which was burned up in the final fiery judgment. There is a refurbished (new-kainos) heaven and earth provided wherein all are righteous. All enjoy the New Covenant relationship with God. He has all hearts circumcised, all are taught by Him concerning the true meaning of His desire to be worshipped in spirit and truth. All Israel was restored and regenerated in the millennial period. Gentiles were added through the testimony of Israel.  The eternal kingdom is now in place, inhabited by mankind made in God’s image and likeness, now apprehending, appreciating, and applauding His glory forever. All enjoying the New Covenant relationship, having been saved by grace regardless of the period joined to Him, having the law of God written on their circumcised hearts, completely forgiven and at last knowing Him as promised in the covenant.  Jer. 31:33-34; Ezek. 37:26-27