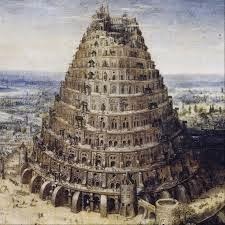 God's judgment of the Tower of Babel was one of the greatest catastrophes in the histo­ry of the world. In one moment, a massive, highly complex building project, involving the entire human race, came to an end. Thousands of workers, linguistically unified and Satanically inspired, suddenly found themselves incapable of communicating with each other. Overwhelmed by fear and frustration, each worker took his family and moved away from the others. Mankind has never recovered.

But what really happened, and why? For centuries, Bible students have wondered about the following three statements:


·  God's amazing response to this: "Behold, they are all one people, and they all have the same language. And this is what they began to do, and now nothing which they purpose to do will be impossible for them" (Gen. 11:6).

Let us now consider these three statements in order. First, were these Mesopotamians who descended from Noah's family actually attempting to build "a tower whose top [would] reach into heaven" (11:4)? The clear answer is "No!" The NASB puts the words will reach in italics, which means that they are not in the original Hebrew text, but were added in an effort to make sense out of the wording. (The KJV italicizes may reach.) But what happens when the Hebrew word­ing is translated literally? We then have "a tower whose top [is] into heaven." (cf. NKJV). And this is exactly what ancient Mesopotamian ziggurat temple-towers were for! The top compartment represented heaven. The inner walls, in all probability, were decorated with blue glazed tile, with the sun, the moon, and the five known planets (Mercury, Venus, Mars, Jupiter, and Saturn) lined up along the plane of the zodiac. In the center of the room would be their "god" seated upon a throne! Nebuchadnezzar later rebuilt such a tower in Babylon, which the Sumerians had called E-TEMEN-AN-KI ("the building of the foun­dation-platform of heaven and earth"). (See J. D. Douglas, ed., The Illustrated Bible Dictionary Part 1, Wheaton, IL: Tyndale House Pub., 1980, p. 155.) The pyramids of Egypt and, much later, the great Mayan temples of Central America, reflected the design and function of the original Tower of Babel.


This was not an innocent, scientifically naive, primitive effort to reach the highest heavens! It was, instead, a brilliant but blas­phemous effort to dismiss forever the God who had commanded Noah and his three sons after the Flood to "be fruitful and mul­tiply, and fill the earth" (Gen. 9:1). Instead of honoring His name (i.e., His character and attributes), they said, "Let us build for ourselves a city . . . and let us make for our­selves a name; lest we be scattered abroad over the face of the whole earth" (v. 4).


The entire enterprise, devoid of reverence, respect, and obedience to the known will of Noah's God, simply reeked with human pride and arrogance. The entire human race, bonded by a common language, became Satan's stupendous instrument to dismiss God from His universe. Satan almost succeeded in dominating mankind again, as he had done at the fall of Adam and Eve, and as he had done before the Flood (with the exception of one family [Gen. 6:5; Heb. 11:7]).


The Response of God


The second statement which we must understand is the shocking response of God to the Babel project: "Nothing which they purpose to do will be impossible for them" (v. 6). The triune, sovereign God of the uni­verse, anthropomorphically viewed as com­ing down from the third heaven, through the immeasurable distances of "outer space," views this tower emerging from the tiny speck called earth with a sadness that only He can know, and pronounces judgment: "Let us . . . confuse their language.. . .So the LORD scattered them abroad from there over the face of the whole earth" (vs. 7-8).


But how did their linguistic unity provide the possibility and potential for infinite iniq­uity? Perhaps we can find the answer by looking at the vast English-speaking world today. Almost instantly, demonic perver­sions and poisons can penetrate and perme­ate the minds of millions through the inter-net. Avalanches of morally hideous films, videos, books, and magazines sweep across the U.S.A., Canada, the U.K., Australia, and South Africa daily, pouring into schools and homes like the locust plague of Joel 2:1-9, 25.


Now, what would happen to this Satanic sewage if the 322 million people who speak English suddenly discovered that their lin­guistic unity was shattered? The blow to Satan and sinful men would be staggering. The intervention at Babel was God's holy and loving purpose in dividing and separat­ing people from each other.


The Earth Was Divided


This brings us to the third significant state­ment: a descendant of Shem named Peleg was a living witness of this great judgment of God, for "in his days the earth was divided" (Gen. 10:25). Some have speculated that this division of the earth was the breakup and separation of continents after the Flood. However, these gigantic earth movements occurred at the very end of the Flood, and actually caused the Flood to end (see Psa. 104:6-9; and discussion in J. C. Whitcomb, The World That Perished, Grand Rapids: Baker Book House, 1988, pp. 37-42); but Peleg lived long after the Flood (see Whitcomb and Morris, The Genesis Flood, Phillipsburg, NJ: P & R Pub. Co., 1961, pp. 476-83).


The entire context of Genesis 10 makes it clear that the division which occurred in the days of Peleg was linguistic, not geological. Note this threefold emphasis: "the coast-lands of the nations were separated into their lands, every one according to his language . . . (vs. 5); according to their languages . . . (vs. 20); according to their languages . . . (vs. 31)." Thus, the linguistic division of
mankind described in Genesis 10 anticipates the more detailed explanation in Genesis 11, just as the brief statement of mankind's cre­ation in Genesis 1:26-28 anticipates the greater details of Genesis 2. Genesis 10 leaves the reader pondering these major questions: how and why did Noah's mono-linguistic family become "separated" from each other (Gen. 10:10, 31), speaking different languages (Gen. 10:5,20,31)? Genesis 11 pro­vides God's amazing answers.
Posted by Unknown at 9:59 AM