THE ANSWER TO JOHN

THE ANSWER TO JOHN 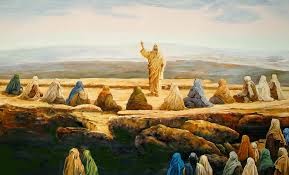 Jesus heals the sick, but He is in no way like a wizard or an exorcist. He has no recourse to chants, to charms, to smoke, veils and mystery. He does not call to His aid the powers of Heaven or Hell. For Him a word is enough, a strong cry, a gentle accent, a caress. His will is enough, and the faith of the petitioner. To them all He puts the question, "Dost thou believe I can do this?" and when the cure is ac­complished, "Go, thy faith hath made thee whole." (Matt. 9:22) For Jesus the miracle is the union of two wills for good, the living con­tact between the faith of the healer and the faith of the one healed. "Verily I say unto you, if ye have faith as a grain of mustard seed, ye shall say unto this mountain, Remove hence, to yonder place; and it shall remove; and nothing shall be impossible unto you. If ye had faith as a grain of mustard seed, ye might say unto this sycamore tree, Be thou plucked up by the root and be thou planted in the sea; and it should obey you." (Matt. 17:20; Luke 16:7) Those who have no faith, not even as much as the thousandth part of a grain of mustard seed, swear that no man has this power, and that Jesus is an impostor.


In the Gospels the miracles are called by three names: "Dunameis"—forces; "Terata"—marvels; "Semeis"—signs. They are signs for those who remember the prophecies of the Messiah; they are "marvels" for those who look for proofs that Christ is the Messiah; but for Jesus and in Jesus there are only "Dunameis," mighty works, victorious lightning-flashes from a superhuman power. The healings of Jesus are two-fold; they are healings not only of bodies but of souls, and it is soul-sickness which Jesus wishes especially to heal so that the Kingdom of Heaven may be founded also on the earth. All are to have perfect health so that they might give perfect worship.


Most sickness is two-fold, mental and physical, and lends itself with singular exactitude to metaphors and allegory. Jesus cured the maimed, the lame, the fevered, a man with the dropsy, a woman with an issue of blood. He healed also a sword-wound—Malchus' ear struck off by Peter on the night of Gethsemane—this only in order that His law . . . "do good to those who wrong you" . . . might be observed to the very last. But Jesus healed more often those possessed by devils, the paralytics, the lepers, the blind, and the deaf-mutes. The old name for mental diseases is possession by devils; even Professor Aristotle believed in possession by devils. It was believed that lunatics, epileptics, hysterical patients, were in­vaded by malign spirits. The contradictory and often merely verbal explanations of the modern medical field does not invalidate the fact that demoniacs, in many cases, are such in the real sense of the word. This learned and popular explanation lent itself admirably to that allegorical and figurative teaching of which Jesus was so fond. He wished to found the Kingdom of God and supplant the divided kingdoms of Satan. It was part of His mission to drive out demons. The difference between bodily disorders and actual malign obsessions was of no importance: between bodily infirmities and spiritual infirmities there is a parallelism of nomenclature, based on real sympathy. There is a likeness between the maniac and the epileptic, between the paralytic and the slothful, the vile and the leprous, the blind and he who cannot see the truth, the deaf and he who will not listen to the truth, the cured and the resurrected.


When John, shut up in prison, sent two disciples to ask Jesus if He were the awaited prophet, or whether they should await another, Jesus answered them, "Go your way, and tell John what things ye have seen and heard; how that the blind see, the lame walk, the lepers are cleansed, the deaf hear, the dead are raised, to the poor the gospel is preached." (Luke 7:22) Jesus did not separate the gospel from miraculous cures. He asked John to verify His ministry by David’s own words which foretold this ministry. They are similar deeds; by that answer he meant that he had cured bodies in order that the souls might be better disposed to re­ceive the gospel which David also enjoyed.


Jesus, Healer and Liberator, is not what the bad faith of His modern enemies wish to imagine Him, in order to make golden once more their comfortable paganism and to protect it against self-discipline. "He is the God," they say, "of the sick, the weak, the dirty, the wretched, the strength less, and the servants." But all that Christ does is to give health, strength, purity, wealth, and liberty. He draws near to the sick precisely in order to drive away their sickness; to the weak to lift them out of their weakness; to the dirty in order to cleanse them; to slaves in order to free them. He does not love the sick only because they are sick: He loves health, just as the men of antiquity did, and He loves it so greatly that He longs to give it back to those who have lost it. Jesus is the prophet of happiness, the promiser of life, of life that is worthier to be lived. The miracles are only pledges of His promise of the Kingdom to come.* And there they perfectly worship in spirit and truth.
Posted by Unknown at 5:57 AM