HUNGER AND THIRST AFTER RIGHTEOUSNESS

BLESSED ARE THEY THAT HUNGER AND THIRST AFTER
RIGHTEOUSNESS: FOR THEY SHALL BE FILLED 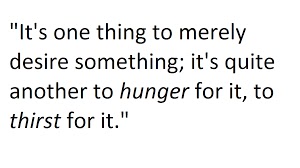 “Blessed are they which do hunger and thirst after righteousness: for they shall be filled.”
Matt. 5:6


The righteousness which Jesus means is not the righteousness of men, obedience to human law, conformity to rules, respect for tradition and for the established transactions of men. In the language of the psalmists, the prophets, the saints, the just man is he who lives according to the will of God, because God is the supreme type of all perfection. Not according to the law written by the Scribes set down in the Bible, diluted by Tal­mudic subtleties, obscured by the restraints of the Pharisees; but according to the one simple Law which Jesus reduces to one commandment, "Love all men near and far, your fellow countrymen and foreigners, strangers and enemies." Those who hunger and thirst after this righteousness shall be filled in the Kingdom of Heaven. Even if they do not succeed in being perfect in all things, much will be pardoned for their endurance of the long vigil.


Oxymoron-Lusting Saints. This seems to be a retrogression, a going back. But it is a progression, a going forward. Who is the man that hungers and thirsts after righteousness but the man who himself is meek and possesses the earth, who has mourned and has been comforted, who is poor in spirit and has submitted to rule? What s hunger and thirst after righteousness? It is Divine discontent with everything unlike God. Do not make this a small and narrow personal experience. It is that, but it is infinitely more. It is the passion for the setting up of the Kingdom of God amongst men. It is the thing that makes you--if you are a Christly soul--hot, and restless, and angry, and discontented, in the presence of all the misadministration of the affairs of men, which result in the ruin and sorrow of men on every hand. "They that hunger and thirst after righteousness...shall be filled," they shall be satisfied, there shall come to such all that for which they hunger and thirst. Perhaps not today, perhaps not tomorrow; but it is certain whatsoever the appearance of today.


These, then, are the passive characteristics of the character of the Kingdom; poverty of spirit, which submit to government and possesses the Kingdom; mourning over declension, which is comforted with the great comfort of God; meekness which is unconscious humility and willingness to submit, which possesses the earth; hunger and thirst after righteousness-a great passion for the Kingdom of God, which is filled in hope and at last shall be filled in actual realization.
Posted by Unknown at 12:18 PM