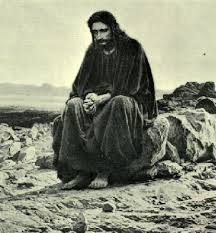 Nobody in Capernaum could remember having heard such a Rabbi. The Sabbaths when Jesus spoke, the Synagogue was full, the crowd overflowed out on the street, everybody was there who could come. The gardener comes, who for that day had left his spade, and no longer turned his water wheel to irrigate the green rows of his garden, and the smith, the good country smith, black with smoke and dust every day, but on the Sabbath washed, neatly dressed, his face still a little dusky, although scrubbed and rinsed in many waters like his hands, with his beard combed and anointed with cheap ointment (but still perfumed like a rich man's beard), the smith all whose days are spent before the fire, sweaty and dirty except this day which is the Sabbath, when he comes to the Synagogue to hear the ancient word of the Ancient of Days, the God of his fathers. He comes devoutly, but he comes too because his family, his friends, his neighbors come there, and he finds them all together, and he comes also because the day is long (all that long holiday without any work, without any hammer in his hand, without the pincers) and in Capernaum there is nothing to do on Sabbaths except go to the Synagogue. The mason comes, he who has worked on this little house of the Synagogue and made it small because the Elders—good, God-fearing people, but inclined to be stingy—did not wish to spend too much. The mason still feels his arms a little numb and lame from his six days' labor, no longer keeps track of the stones which he has laid in courses and the trowels full of mor­tar which he has thrown between the stones during the week.


The mason puts on his new clothes today and sits down on the ground, he who on all other days stands upright, active, watchful so that the work may go well and the employer be satisfied; the good mason too has come to the house which seems to him partly his own.


The fishermen have come too, the young and the old, both of them with faces tanned by the sun and with eyes half-shut from the constant glare of sunlight reflected by the water.


(The old man is handsomer because of the contrast of his white hair and white beard with his weather-beaten and wrinkled face.) The fishermen have turned over their boats on the sand, have left them tied to a stake, have spread the nets on the roof and have come to the Synagogue, although they are not used to being within walls and perhaps continue to hear a confused murmur of water lapping about the bow.


The peasants of the neighboring countryside are here too, prosperous farmers who have put on a tunic as good as any­body's, who are satisfied with the harvest almost ready for the sickle. They do not mean to forget God who brings the grain to a head and makes the grape-vine to blossom. There are shepherds come in to town that morning, shepherds and goat-herds with the smell of their flocks still on them, shepherds who live all the week in the mountain-pastures with­out seeing a soul, without exchanging a word, alone with their quiet animals peacefully grazing on the new grass.


The smaller property owners, the small business men, the gentry of Capernaum, all have come. They are men of weight and piety. They stand in the front row, serious, their eyes cast down, satisfied with the business of the last few days and satisfied with their conscience because they have observed the law without failing and are not contaminated. The line of their well-clad backs can be seen, bowed backs but broad and masterful, employers' backs, backs of people in harmony with the world, and with God, backs full of authority and of religion. There are also transient foreigners, merchants going towards Syria or returning to Tiberius. They have come from condescension or from habit, perhaps to try to pick up a customer, and they stare into everybody's face with the arrogance which money gives to poverty-stricken souls.


At the back of the room (for the Synagogue is only a long white-washed room a little larger than a school, than an inn, than a kitchen) the poor of the countryside are huddled to­gether like dogs near a door, like those who always stand in fear of being sent away. The poorest of all, those who live by odd jobs, by ungracious charity and also—oh, poverty!—by some discreet theft, the ragged, the vermin-ridden, the timid, the wretched; old widows whose children are far away, young orphans not yet able to earn a living, hump-backed old men with no acquaintances, strength less invalids, those who are incurably sick, those whose wits no longer rightly serve them, who have no understanding, who cannot work. The weak in mind, the weak in body, the bankrupt, the rejected, the aban­doned, those who one day eat and the next day do not, who never have enough to satisfy their hunger, those who pick up what others throw away, the pieces of dry bread, fish-heads, fruit-cores and skins; and sleep now here and now there, and suffer from the winter cold and every year wait for summer, paradise of the poor, for then there are fruits to be plucked along the roads. They too, the beggars, the wretched, the children, the sickly and the weaklings, when the Sabbath comes, go to the Synagogue to hear the accounts of the Bible. They cannot be sent away: they have as much right to be there as any one, they are sons of the same Father and servants of the same Lord. On that day they feel a little comforted in their poverty because they can hear the same words heard by the rich and the strong. Here they are not served with another sort of food, poorer and coarser, as happens in the houses where the owner eats the best and the beggar on the threshold must content himself with scraps. Here the fare is the same for the man of possessions and him who has nothing. The words of Moses are the same, everlast­ingly the same for him who owns the fattest flock and for him who has not even a quarter of lamb on Passover day. But the words of the Prophets are sweeter to them than those of Moses, harder on the great of the world, but kinder for the humble. The poverty-stricken throng at the back of the Syna­gogue waits every Sabbath for somebody to read a chapter from Amos or from Isaiah because the Prophets take the part of the poor, and announce the punishment and the new world. "And he who was clothed with purple shall be made to handle dung."


And behold on that Sabbath there was One who came ex­pressly for them, who talked for them, who had come back from the desert to announce good tidings for the poor and the sick. No one had ever spoken of them as He did, no one had shown so much love for them. Like the old prophets, He had for them a special affection which offended more fortunate men, but which filled their hearts with comfort and hope.


When Jesus had finished speaking they observed that the elders, the middleclass, the masters, lords, Pharisees, men who knew how to read and make money, shook their heads fore­bodingly, and got up, making wry faces and nodding among themselves, half contemptuous, half scandalized; and as soon as they were outside, muttered a grumbling of prudent disap­probation through their great black and silver beards. But no one laughed.


The merchants followed them, erect, already thinking of the next day; there remained behind the working men, the poor, the shepherds, the peasants, the gardeners, the smiths, the fishermen, and all the herd of beggars, orphans without inherit­ance, old men without health, homeless outcasts, friendless un­fortunates, penniless men, the diseased, the maimed, the worn-out, the rejected. They could not take their eyes from Jesus, they would have liked Him to go on speaking, to reveal the day of the New Kingdom when they too would have their re­turn for all this misery, and see with their own eyes the day and way of reckoning. The words of Jesus had made their bruised and weary hearts beat faster. A gleam of light, a glimpse of the sky and of glory, the hallucination of prosperity, of ban­quets, of repose and abundance, sprang up from those great words in the rich souls of the poor. Perhaps they scarcely understood what the Master meant to say, and perhaps the Kingdom glimpsed by them had some resemblance to a materialistic Land of Cockaigne. But no one loved Him as they did. No one will ever love Him like the poor of Galilee, hungering after peace and truth. Even those who were less destitute, the day-laborers, the fishermen, the working men, though less hungry for bread, loved Him for the love of those poor.


And when He came out from the Synagogue all those stood waiting in the street to see Him again. They followed Him timidly as if in a dream; when He entered into the house of a friend to eat they were almost jealous and some waited out­side the door until He reappeared; then, grown bolder, they detained Him and went along together beside the shores of the lake. Others joined them on the way, and now one and now another (they were braver under the open sky and outside the Synagogue) began asking questions. And Jesus paused and answered this obscure crowd with words never to be for­gotten.
Posted by Unknown at 6:06 PM