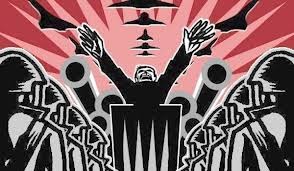 “And through his policy also he shall cause craft to prosper in his hand; and he shall magnify himself in his heart, and by peace shall destroy many: he shall also stand up against the Prince of princes; but he shall be broken without hand.”  Daniel 8:25

The vision of Daniel recorded in this chapter came to him in the third year of Belshazzar. As the explanation of it, given by Gabriel, shows, it was concerned with the overthrow of the Medo-Persian Empire by that of the Greeks. It was a remarkably lucid foretelling of all that came to pass, and especially of the doings of Antiochus Epiphanes. His pride carried him so far that by his actions he openly challenged and defied God, as he violated His sanctuary. The title of "Epiphanes" which he assumed means "Manifest," and the assumption of that title was in itself a claim of Deity. Thus he stood up against the Prince of princes. This is the logical issue of autocratic ambition. It sets itself against all rule and authority other than its own, and if it be successful over human competitors, it attempts to fling off the final authority, which is that of God and this it does by claiming Divine power and authority for itself. This has happened again and again in human affairs; and it will happen at least once more, in the Man of sin, the Antichrist. But when it does this, it comes to its doom; it falls upon Rock, and is broken without hand, that is, not by human intervention, but by the direct act of God. Antiochus died, not in battle, but by the swift stroke of God taking the form of mental derangement. Whereas this vision of Daniel had to do primarily with Greece its principles are of perpetual application, and will have their complete fulfillment in the final things of this age.
May the rulers in our age be careful not to think too highly of themselves or their regime.
Posted by Unknown at 1:05 PM