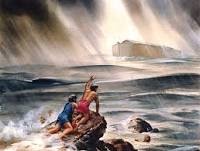 And can it be that I should gain
An int’rest in the Savior’s blood?
Died He for me, who caused His pain?
For me, who Him to death pursued?
Amazing love! How can it be
That Thou, my God, shouldst die for me?


Jesus came to die that others might gain. He PURSUED death knowingly the whole three years of His ministry on earth.


We all are also on a death march whether we sense it or not.


And those who wanted Him here forever knew what would be the outcome of that trip.


Our path and destination might not be to Jerusalem but the outcome is the same. We all get the chance to die. And then the judgment facing the One Who came to die for us all. (Heb. 9:27)


Some reach that destination before they anticipate.


Some hurry the end result by their lifestyle.


And they desire others to live by the same beliefs as they, which gives them a small sense of security in a dying world where they live.


They as the latest generation have a mindset that gets a sense of purpose through their development of morals, ethics, and principals that all around them agree upon.


They have abandoned the mindset of their parents’ generation, using the Bible as their moral compass, and have been taught that all around the globe believe as they.


And then this Trump character comes into the picture ready to abandon the international global mindset and speak of America first, a national mindset and even make it better than it ever had been.


That goes into direct opposition to all their teaching. America has been the bad guy internationally and Obama gave evidence in all his international dealings that he believed that to be true as well.


But now all of a sudden they have lost that direction and Trump was promising more of what they had been taught through out their schooling that America had dues to pay yet. So the riots begin, the looting, the burning, the thefts, while the police need to be attacked, not obeyed.


This one world global ethic, one world global political mentality that the last two generations has been taught is now in place. And when someone speaks of nationalism rather than an international global position they lose all their hope of continuing to move in the direction of solidarity with the world and its thinking.


So they race to the destination that Christ warned would be the movement in the end. A new morality, a new set of rules to live by, a new set of principles to follow after. Boys can decide to be girls and girls boys. A man can decide that he feels that he is a woman and get an operation to complete his journey. A woman has control over her body and abortion is a common exercise of that right. And then the government joins in this mindset making it politically correct to think these thoughts. The human journey to death that THEY PURSUE unknowingly, thinking they have life at the highest level is the foundational belief in the end. And many in the church, even raised in the church have this international (One World) global mindset. Satan has the stage set, or rather God does. Satan is a willing participant whether he wants or not.


God has a small remnant that still believe that to be true, therefore just as He said, as in the days of Noah when 8 got on the boat, the world is about to discover judgment by fire. (2 Pet. 3:7) For in Noah's day all the rest were partying with their own morality, ethics and principles giving them life on the highest level. But the water went higher.
Posted by Unknown at 4:11 PM